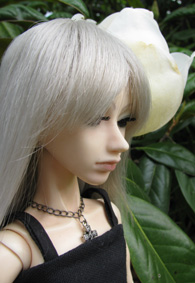 Personality: Arrogant, sadistic, sarcastic, and manipulative, Luphase is a shapeshifter who chooses his appearance based both on personal whim and what he believes will be the most effective on a given being. As befits his imperial position, he carries himself with class; a decorus veneer that hides well the perversions lurking below the surface. Though with this comes a capability for seeming to extend great kindness, these displays are most often accompanied by ulterior motives.

Background: Legends of the torn world say that, pursued by the followers of a vengeful god, the fae-races of Déchiré abandoned their bodies to seek sanctuary in Eidolon. A few made the crossing safely and, once on the other side, commenced mirror-lives of those they had once led. Others were irrepairably damaged – torn themselves asunder and left as little more than drifting pieces of soul. Still more were indelibly changed, becoming the embodiments of their most driving force – spirits of nature, of emotion, of virtue and sin.

Among the latter were the Anima Prima – beings so envious of what had been lost to the hordes of Getu that some came into existance through the power of their own will. Though none were born to solid flesh, they nonetheless crafted their forms in its image – impotent gods, able to turn creation to their whim yet without true influence over the world.

Though called by one name, the Anima Prima were not a united race. Those with the most ability fought each other for control, and those with the least to seize it from those superior. The only common ground was found in the desire for a permanent home for the soul – and when such an opportunity presented itself at last, the Anima Prima grasped at it without hesitation. Coming together for the sake of mutual benefit, a repesentative was elected to attend the council that would pave the way for their return to the Seen World – however, on obtaining the power needed, their delegate fled, leaving his kin to their intangible fate.

The Anima Prima were not the only beings to be slighted so – even Reme Lenoir, the fallen priest who had revealed the sacred rite in the first place, found himself excluded from reaping its benefits; and it was in the human that an entity calling itself Luphase found a kindred spirit. Though he could not manifest physically, he none-the-less managed to seduce the young man; and the two engaged in what bitter, ethereal relations they could for many years. Star-crossed lovers, Luphase, the bodiless immortal, watched as Reme, human and finite, aged and died. Consumed by hate and misery, he secluded himself with the arcane texts collected by the churchman; desperately seeking any means by which a drifting soul might be tethered to a solid form. Resurrection seemed beyond even the greatest alchemists – but infusing an inanimate shell with the otherworldly, who had never known true life, was a prospect that held promise. Even if he could not recall the departed, he could, perhaps, grant his kin that which had been denied them for so long. It would not be given freely, though – in exchange for the knowledge, he would insist upon sovereignty of his kind.

The demand was met with little resistance – whether because dejected, his kin had no more will to fight, or because they believed that even if betrayed again, they could be no more worse off than they already were was of no concern to Luphase. The end result was the same. On the eve of the Winter Solstice, as the first of the Anima Prima prepared to leave the mists, Luphase assumed the throne. Clad not as emperor, but as Widow-Queen, he lingered; becoming as much the personification of his race as his own being. Alone, he waited.

Time passed, but Reme did not return – and neither did Cel Rau; he who had absconded with godhood. Rising in frustration, uttering a cry that echoed from the eternal snow, Luphase left the crown to a waiting prince and began a hunt that would carry him through the mists and beyond; searching world after world for traces of Cel Rau, and pursuing still the secrets of life both solid and immortal…