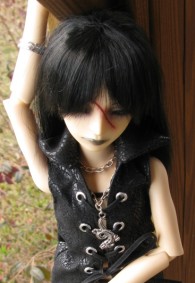 Personality: Cruel, secretive, and sensual, Andha is as venomous in tongue as fang. Unconcerned with the way others may view him, his words are blunt to the point of being vicious. His victims are often subject to lengthy games of cat and mouse, though when the killing moment comes, it does so swiftly. Dominant by nature, he assumes a subservient role to Luphase simply because the benefits outweigh the sacrifice.

Background: Like the Anima, the nagakind were driven into hiding by the war of the gods. Rather than abandon physicality, however, they took to the shadows of the solid world; sealing themselves up in caverns and valleys inaccessible to less-agile creatures. Over their eons of exile, they lost both the need and the desire for holy guidance and chose not to participate in the Council of Gods Reborn.

Technically mortal but so long-lived as to rival the elves, the nagakind were divided into various tribes. Some, all but harmless, lived in peaceful isolation; feeding on the fruit and water of the valleys and killing only when necessary. Others, venomous or not, held wary truces with outsiders. A few, feared even by their kin, engaged in bloodthirsty rites; wreaking havoc on those they encountered and leaving swaths of destruction in their wake. Among the latter was the Clan of Ruja’a; whose king, Andha Sadangula, delighted in abducting both men and women for pleasures best left unspoken. Though a full injection of his venom was invariably fatal, a partial dose could bring his victims under a hypnotic spell. Some, bound to his will, were kept as puppet-slaves, while others, paralyzed and helpless, became food.

So terrified were the nearby villagers that they at last petitioned the local monastery for aid. Banded together and led by the most skilled of the warrior-monks, they marched by day on the sleeping serpent-kin and – though not without great loss to their own numbers – drove the most hated of the naga-clans to the edges of the world. Scattered and broken, the Ruja’a fled through the mists. Those who survived the journey settled in whatever habitable place they first managed to reach.

Imprisoned in a foreign world and seperated from both subject and servant, Andha lurked on the fringes of society. The abilty to shed his skin and assume a more human form, rarely used among his own kind, became an unexpected blessing; allowing him to hunt in the midst of his prey rather than waiting for a victim to come to him. And so he endured – until a chance encounter that brought two exiles together. Bereft of true life and no stranger to manipulation, Luphase proved immune to the naga’s poison and quickly turned the tables on his attacker. The two eventually came to an understanding: In exchange for services rendered in the Countless Worlds – services too complicated or distasteful to be trusted to Endymion – Andha would be appointed as Luphase’s vizier once the latter struck down the false god and reclaimed his throne. Ever-indulgent in the most perverse of pleasures, Andha became spy, assassin, and lover; his skills traded for the dark rewards of Luphase’s bed and the promise of new power.